On any given day, about 15,000 people in Oregon lack housing across the state. Portland alone counts about 2,000, including people living in tents and campers off Southeast Powell Boulevard in Portland. (Fred Joe/Oregon Capital Chronicle) 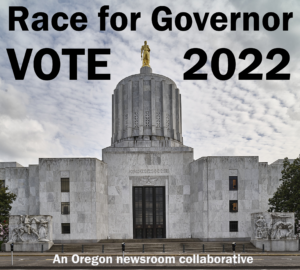 Oregon has been in a housing crisis for years.

State economists say the state is short about 111,000 homes needed for current residents. When economists considered future growth, a 2021 analysis suggested the state needs to build more than 580,000 homes by 2040.

Homes that are on the market are out-of-reach for many residents. Oregon’s median household income is just over $71,000, but the median home price is well over $500,000 statewide.

And the effects of housing instability can be seen in cities around the state, where makeshift tent villages line streets and fill parks and underpasses.

Oregon’s next governor will set the state’s housing policy, wielding significant influence over whether current residents and their children can remain in the state and whether employers will be able to recruit workers needed to maintain or grow their businesses.

Building 580,000 homes by 2040 means constructing at least 30,000 homes a year, while the state has averaged less than 20,000 in recent years. As Johnson sees it, reaching that goal will require the Legislature and state agencies to pull back on regulations. Legislators shouldn’t pass bills mandating things like electric vehicle charging stations or non-gas fixtures that drive up costs, and state regulators should speed up their permitting processes, she said.

Johnson has called for a comprehensive review of the nearly 50-year-old state law that established Oregon’s unique land-use system. That law limits where and how homes and businesses can be built, preserving fertile farmland in the Willamette Valley and the state’s vast forest expanses. But critics also say it drives up housing costs and makes building homes much more difficult in Oregon than states with lax laws.

“Back when Senate Bill 100 was passed to protect farms and forests, we didn’t have a need for as much housing as we have now,” Johnson said. “Three million people roughly have moved into the state. We need some kind of legislative review of land use with an eye specifically toward how to accommodate housing.”

Johnson said the Legislature took the wrong approach with its 2019 rent-control law, which caps annual rent increases at 7% plus inflation and restricts no-fault evictions. It resulted in landlords deciding not to rent and reduced the homes available for renters, she said.

Johnson has made criticizing Portland’s homelessness problems a key part of her campaign, filming videos by homeless camps, calling Kotek “Tent City Tina” and angering Portlanders by quipping to the New York Times that Portland, the city of roses, looked more like a city of roaches.

She says she is the only candidate who actively worked on helping homeless people find housing through her support of the Bybee Lakes Hope Center, a homeless shelter in the never-used Wapato Jail in Portland. Johnson reached out to developer Jordan Schnitzer when he purchased it in 2018 and asked if he’d donate kitchen equipment to a nonprofit organization, Helping Hands. Instead, Schnitzer partnered with Helping Hands to create a homeless shelter that now has beds for about 300 people.

The Bybee Lakes center requires anyone who wants to stay for more than a few days to remain sober, pay a small monthly rent and find and maintain a job. Most shelters in Portland follow a low-barrier, housing-first model – they try to get people sheltered and then provide services from there.

As co-chair of the Legislature’s budget-writing Joint Ways and Means Committee, Johnson secured $2 million in state funding for the project. She supports the vision of Helping Hands founder Alan Evans, who was homeless for 26 years beginning in his teens, and she said she wants to work to expand that model elsewhere in Oregon.

“Alan talks about the time that he spent on the streets, so he speaks with a certain authenticity about the value of the structure of Helping Hands at Wapato,” Johnson said. “So we get to repurpose an unused building, we’re getting people clean and sober and reintegrated back into their communities, all of which is a terrific outcome.”

(Editor’s note: Tina Kotek and Betsy Johnson readily agreed to be interviewed separately by the six reporters who contributed to this project. Christine Drazan, however, declined. This section is based on her statements and her record.)

Drazan pledged to declare a state of emergency for homelessness on her first day as governor. She contends that the state’s homelessness crisis is driven primarily by addiction and mental health issues, and that reducing homelessness will entail repealing Measure 110, the 2020 voter-approved law that decriminalized possession of small amounts of hard drugs.

She also has called for allowing cities to enforce bans on urban camping. In a 2018 decision involving the city of Boise and a subsequent 2022 decision on a Grants Pass ordinance, the Ninth Circuit Court of Appeals forbade criminal penalties for sitting, sleeping or lying outside on public property. The Grants Pass case also confirmed that homeless people can use “rudimentary forms of protection from the elements,” such as sleeping bags, blankets and cardboard boxes, when they have nowhere else to go.

Drazan said during a September debate in Bend that she wanted homelessness to be rare and temporary.

“We need to continue to expand access to mental health supports and behavioral health supports, and certainly a substantial effort has been made to add new shelter space recently, but with that, you have to hold people to account,” she said. “They cannot continue to deprive communities of safe and livable spaces, because they are choosing in some cases to remain homeless.”

Her housing plan includes expanding incentives for developers and pausing regulations that increase costs. She said in the Bend debate that Democratic policies, such as recent rules requiring that new housing developments include infrastructure for charging electric vehicles, drive up costs.

“If you want a perfect world where all homes meet all climate objectives, it drives costs,” Drazan said. “If you want people to build in a particular way, it drives costs. There have been years and years and opportunity after opportunity for Speaker Kotek to be able to address this issue in a way that’s responsive to what builders have asked for on the ground, and instead, all they’ve done is add taxes.”

Kotek contends that she has been focused on housing and homelessness for years, while her opponents came late to the issue.

“The real distinction in this race is I’ve been trying to do everything possible as speaker of the House, and it’s still not enough, and the two of them have done pretty much nothing in their entire time in the Legislature,” Kotek said.

Kotek’s housing plan calls for building more than 36,000 homes each year for the next decade to meet the existing 111,000-home shortage and prepare for increased demand from people moving to Oregon. To accomplish this, she said she’ll issue an executive order her first day in office to increase the pace and scale of home construction and ensure state agencies reduce red tape and speed up the permitting process. Education and job training to build Oregon’s construction workforce and new approaches to providing financing for houses are also key parts of the plan, she said.

Her legislative record includes a first-in-the-nation law that effectively banned single-family zoning in most cities. That 2019 law, House Bill 2001, requires cities with more than 10,000 residents to allow duplexes wherever they would allow construction of single-family homes. Cities with more than 25,000 residents and those in the Portland metro area must also allow triplexes, fourplexes, townhouses and clusters of cottages.

White House officials said last year that Oregon’s law could be a model for other states, though it’s not a quick fix for the state’s housing shortage. It cleared the way to add housing in small quantities in existing neighborhoods, and it could create cheaper paths for first-time homebuyers.

“How do you get out of the cycle of having to rent if you have a good job and you’re trying to buy? As governor, I’m gonna be very focused on that end of the housing spectrum as well,” Kotek said. “We have to help renters with home ownership.”

Kotek championed Oregon’s 2019 rent control law, which caps annual rent increases at 7% plus inflation for all buildings constructed more than 15 years ago and restricts no-fault evictions. With record-high inflation this year, the state Office of Economic Analysis announced in September that landlords can increase rent up to 14.6% in 2023.

Kotek said legislators may need to revisit that formula in the light of high inflation, but she said having it in place was better for tenants.

“It’s definitely eliminated rent gouging, which was the goal,” she said. “We were seeing 50%, 75%, 100% increases in rent prior to that bill, so it has stabilized the market.”

She has supported one-off adjustments to Oregon’s land-use system, including a pilot project in Bend and Redmond that allowed the two central Oregon cities to add more land earmarked for affordable housing without going through the rigorous planning and application process to expand their urban growth boundaries. But Kotek said she wouldn’t support a full overhaul of Oregon’s land-use laws, and that cities should remain focused on building more housing inside their boundaries instead of finding ways to sprawl.

When it comes to homelessness, she said her first focus would be getting more street outreach teams to work with people living in tents and get them the services they need to get into stable housing. She championed Project Turnkey, which added 900 new shelter beds in repurposed hotels and other abandoned buildings since it launched with $65 million in 2020. Legislators appropriated another $60 million combined  in 2021 and 2022.

Kotek said she believes that by 2025 the state can eliminate homelessness for certain populations, including veterans, families with children, people older than 65 and young adults who were previously in the foster care system. Helping people who have been chronically homeless and dealing with mental health or addiction issues will take more work, she said, adding it will require collaboration and idea-sharing from communities around the state.

Our stories may be republished online or in print under Creative Commons license CC BY-NC-ND 4.0. We ask that you edit only for style or to shorten, provide proper attribution and link to our web site.

Julia Shumway has reported on government and politics in Iowa and Nebraska, spent time at the Bend Bulletin and most recently was a legislative reporter for the Arizona Capitol Times in Phoenix. An award-winning journalist, Julia most recently reported on the tangled efforts to audit the presidential results in Arizona.